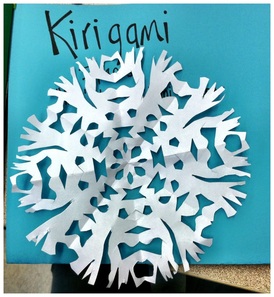 It's the week before Winter break and I had planned to tap into the kids excitement of snow for this project - but since it seems that December is determined to act more like spring than winter there is no extra 'snow excitement'.  I decided to stick with the project anyhow, knowing the kids would love it even if it was raining outside and 50 degrees.

I started out the lesson with the word "Kirigami" on the board and asked students to raise their hand if they thought they might have an idea of what "Kirigami" meant.  I asked them if it sounded like another word we already know.  At this point a bunch of hands flew into the air.

Most times someone would mention cutting paper - or said that maybe Kirigami was like a paper snowflake.  I proceeded to explain that like origami, kirigami is a Japanese word and art form.  The word Kirigami roughly translates to "kiru" = to cut and "kami" = paper.  Kirigami is paper that is folded and then cut - revealing a symmetrical design. 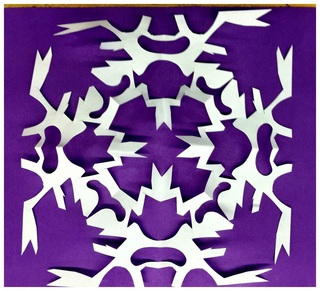 For the younger kids, k-2, we learned what symmetrical was and then 2-5th learned that sometimes  there can be more than one line of symmetry.  I proceeded to draw some basic shapes on the board and asked students to show me on their fingers how many lines of symmetry an equilateral triangle would have.  I then waited for all hands to show me a number before I had a student come up and draw a line of symmetry.  We repeated this with a square as well.  Students really got into trying to figure out how many ways you could divide a shape in half while still having it be the same on both sides!

I transferred this idea back to their kirigami, by explaining that their kirigami would most likely have 2 or 4 lines of symmetry depending on how they cut it. 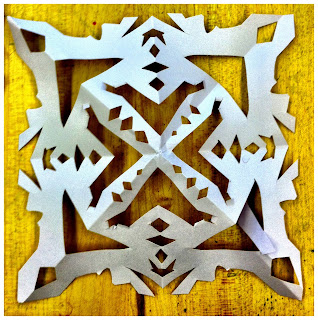 Next we passed out square pieces of paper, folded the first one together, drew on shapes, cut out - and then the students had the rest of class to make as many snowflakes as they wanted.  I had the Kinders and 1st graders fold their paper into a mountain and then fold their mountain in half.  The 2-5th grade students did the same as the younger kids but then folded it one more time in half.

For a few of the classes I drew "challenge" patterns on their papers -- they loved the challenge and their end snowflake!

Email ThisBlogThis!Share to TwitterShare to FacebookShare to Pinterest
Labels: All Grades, Kirigami

I wish I had you when I was in elementary art! Your projects seem so much more fun than the ones I remember doing!

Have you seen the book Zooflakes? It has pictures of animal snowflakes for the alphabet. My Kindergarteners (and I!) like it.

I haven't heard of Zooflakes - but it sounds awesome! I will have to check it out and perhaps use it later this winter or next during our Kirigami unit!